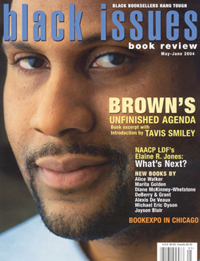 Sojourn
Room at the Inn for Writers

A D.C. bed-and-breakfast not only caters to booklovers as paying guests, but runs a free writer-in-residence program.
By A’Lelia Bundles

The Akwaaba D.C., the third bed-and-breakfast operated by Monique Greenwood, is a booklover’s paradise and a writer’s haven. The five-story, 1920s brownstone-conveniently located near Dupont Circle, in sight of the White House and within walking distance of U Street’s historic African American enclave-boasts eight guest rooms inspired by black authors from an array of literary genres.

Book club members gather by the fireplace in the antique-filled parlor to hear writers discuss their latest books. At breakfast, over friend apples, sausage and other hearty fare, guests are likely to begin their day hearing of works in progress from an Akwaaba writer-in-residence.

Akwaaba, which means “welcome” and comes from the language spoken by the Akan people of Ghana, personifies Greenwood’s blend of casual warmth and accommodating hospitality. Greenwood, former editor-in-chief of Essence magazine and a veteran of other publications, continues to operate both Akwaaba Mansion in Stuyvesant Heights, Brooklyn, New York and Akwaaba by the Sea in Cape May, New Jersey, with her husband, Glenn Pogue.

Greenwood is a native Washingtonian and the author of Having What Matters: The Black Woman’s Guide to Creating the Life You Really Want (William Morrow; December 2001). She also co-wrote The Go on Girl! Book Club Guide for Reading Groups with Lynda Johnson and Tracy Mitchell-Brown (Little, Brown and Company, April 1999).

As Greenwood leads a visitor past Gilbert Fletcher’s “Painted Voices” collection of multimedia portraits of African American authors (see BIBR, EYE, May-June 2003), then up the invitingly creaky stairs, she proudly describes the guest rooms where an overnight stay ranges from $150 (in the African themed Toni Morrison and futuristic sci-fi rooms) to $190 (in the Zora Neale Hurston and Langston Hughes suites).

The Hurston Suite is appropriately bold with garnet-red walls and an antique brass bed. The Hughes Suite-with its cocoa and avocado walls and heavy, dark furniture-evokes scenes from The Big Sea, the autobiography that describes his travels to Cuba, France and Harlem.

Each room, from the mysterious midnight blue walls and black velvet curtains of the Walter Mosely Room to the heavenly, cloudlike etherealness of the Inspiration Suite, is stocked with books that match the mood. Candles and more candles flicker against the deep-burgundy velvet of the Romance Room. The Poetry Suite â€“ with Rita Dove and Saul Williams poems inscribed on the walls above two queen-sized beds â€“ is a slumber-party scene ready for book club members to flock to Akwaaba.

But it is the writer’s getaway in the basement that promises to create a buzz and leave a lasting legacy. In the “room of one’s own,” about which most writers fantasize, Akwaaba offers a Caribbean-inspired escape with a separate entrance, king sized bed, pots and pans and high speed Internet connection. Writers can apply to be selected for a two-week stay at no cost.

As an author herself, Greenwood is only too aware that solitude remains scarce even for many established writers. But with so many people writing books, she developed guidelines for Akwaaba retreat applicants. “To qualify you either have to be a writer with a contract or a self-published author who has published before,” she says. Unpublished authors can also compete for a chance to use the writer’s retreat.

“Monique is a community builder who is providing what every author needs: a safe comfortable haven where a writer’s only concern is to create,” says Janet Hill, vice president and executive editor of Doubleday/Harlem Moon, who has edited several of the books displayed throughout the inn.

Yanick Rice Lamb, a journalist, author and news-sequence coordinator at Howard University’s School of Communications, became Akwaaba D.C.’s first official writer-in-residence in November 2003. She was working on a soon to be published biography Born to Win: The Althea Gibson Story, scheduled for August 2004 by Wiley. She has previously published Spirit of African Design with Denys Davis and Sharne Algotsson, (Clarkson Potter, August 1996); and she is also writing a book on bid whist called Rise & Fly (Crown) also due out in 2004.

“What Monique is doing now is really a gift and blessing for writers,” says Lamb, who was editorial director for Heart & Soul and BET weekend magazines and has been editor at the New York Times and other publications.

Patrik Henry Bass, book editor for Essence magazine, is also a frequent guest of the inn. He is author of Like a Mighty Stream: The March on Washington, August 28, 1963, (Running Press, October 2002) and co-author of In Our Own Image: Treasured African-American Traditions, Journeys & Icons (Running Press, November 2001). Bass praised Greenwood’s role in encouraging reading. “As president of the Go on Girl! Book Club, she saw first the passion that black women had for books,” say Bass. “And she was adamant that we support black bookstores and booksellers.”

The inn also hosts an author series featuring discussions with favorite writers. Greenwood expects her guests to be a mix of business travelers, couples, single women and book club groups.

“The idea of B&Bs is a pretty new one to us as African Americans,” say Greenwood. “Most of my guests are first time inn-goers. So part of my job is to make their first experience great.”

When they go out for dinner, we run their bath,” says Greenwood, who has spent at least one night in each room so that she can be even more attuned to her guests’ desires. “When they return, the candles are lit. The bed is turned down. The music is playing. So everything is very, very high touch.”