Make yourself at home in a glorious 1860s landmark mansion. The meticulously restored Italianate villa features exquisite architectural details, including 14-foot ceilings and ornate fireplaces, while the décor is a blend of antiques and Afrocentric elegance. Located in historic Stuyvesant Heights, Akwaaba Mansion is nestled in a quiet tree-lined community with some of the city’s finest brownstones. The historic Brooklyn neighborhood is rich in culture, and the excitement of Manhattan is only 15 minutes away by subway or car. Enjoy a glass of lemonade on the sun porch, savor a hearty Southern breakfast in the dining room, dream the day away under a majestic chestnut tree in the secluded garden. Enjoy a massage or a Jacuzzi for two in the privacy of your room. This is your luxury getaway in the city. 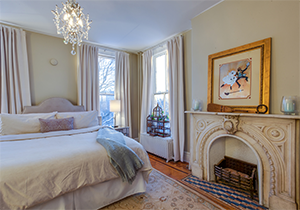 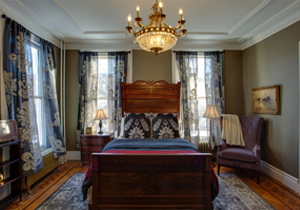 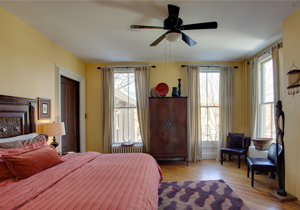 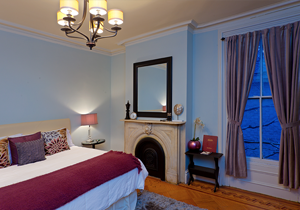 “They welcome us with open arms and warm biscuits!”
Essence magazine

“Looking to have a romantic getaway weekend? We suggest making reservations at Akwaaba Mansion.”
Village Voice

or the past decade or so, Brooklyn has been called “The New Manhattan.” That’s because a hip, independent artist enclave now calls the borough home, and critically acclaimed indie restaurants have sprouted up everywhere, along with unique boutiques and flea markets.

Perhaps no neighborhood in the borough has seen as much of a renaissance as Bedford-Stuyvesant, called Bed-Stuy for short. Stuyvesant Heights, the area’s historic district and home of Akwaaba Mansion, thrives with ethnic diversity, a rich architectural heritage, and a central location that makes it easy to get to other hip, Brooklyn communities like Williamsburg, Clinton Hill and DUMBO. While in the neighborhood, stroll the historic streets, grab a bite to eat at Peaches, voted the best bar-be-que in the city, or a slice of pizza at Saraghina, a hipster hub that instantly transports you to chic Italy.

Take a longer walk or a short cab ride, and you can visit the Brooklyn Museum (their free First Friday celebrations are a must) and the beautiful Brooklyn Botanical Gardens, next door to the Museum and alongside The Prospect Park Zoo. Go in the opposite direction, and you’re at Pratt Institute, one of the country’s leading art schools, a few blocks away from the Brooklyn Academy of Arts (BAM), with three theaters for live, international musical, theatrical and dance performances and four screens for independent and edgy first-run films.

While in downtown Brooklyn, walk the promenade and enjoy one of the best views of Manhattan anywhere. And if you actually want to go to Manhattan, walk across the iconic Brooklyn Bridge to get there. Of course, you could always take the popular “A” train right from the inn, and be in Manhattan in 15 minutes!