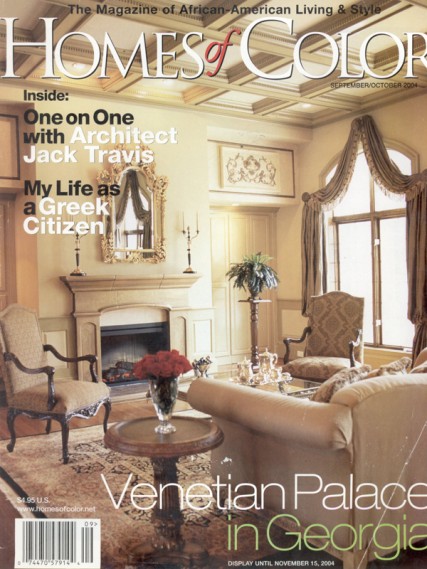 Written by Quintin Chatman
Eight new telephones, that’s what she needs today. People are arriving later in the afternoon, so there’s only a two-hour window. She’s in the car, at the electronics store, and back just in time to greet her guests. Mission accomplished.

Welcome to the wonderful sometimes hectic world of Monique Greenwood.

Last year, with husband Glen Pogue, Greenwood opened Akwaaba D.C., the newest bed and breakfast to grace the landscape in the nation’s capital. Opening the B&B is a homecoming for Greenwood, a native Washingtonian and graduate of Howard University. She has experienced success on many levels, including the publication of her bestseller Having What Matters and two years as editor-in-chief of Essence Magazine.
[clear]

Greenwood has been living in New York City for 15 years, but she is in the District of Columbia almost every weekend. The notion of owning an inn came to her 12 years ago after having been a guest at various inns. “I enjoyed the experience from the perspective of a guest, and it was clear to me that being an innkeeper really combined all my passions. I love meeting people and I love entertaining. Decorating is another passion of mine.”

Akwaaba means “welcome” in a language spoken in Ghana. That’s just how Greenwood and Pogue aim to make guest feel when they arrive at the B&B in the historic Dupont Circle neighborhood. If this energetic couple seems to do it with style and ease, it’s because they’ve had practice. Akwaaba D.C. is not their first B&B, it’s their third. It joins Akwaaba Mansion (Brooklyn, NY) and Akwaaba by the Sea (Cape May, NJ).

Akwaaba D.C. is an elegant five-story townhouse. Each of the eight guest rooms has a private bath. The portraits of 28 African-American writers, by Bronx artist Gilbert Fletcher, adorn the hallways. There is also a writer’s retreat at Akwaaba D.C., a self-contained apartment where writers can come for a two-week stay to work on their book projects. Staying at this B&B will invigorate and rejuvenate, and Greenwood would not have it any other way.

At many B&Bs, guest rooms are named after a color or after a relative. Greenwood didn’t want to go that traditional route. Instead, she named and decorated the rooms with a literary theme in mind.

“As I thought about furnishing the guest rooms, I realized that there was no place that honored African-American authors. There are halls of fame for athletes and awards for entertainers. Why not have a place that celebrates writers? In the end, I named four rooms after authors and four rooms after a particular genre.” Akwaaba D.C.’s guest rooms are named in honor of Zora Neal Hurston, Toni Morrison, Langston Hughes, and Walter Mosely, as well as in celebration of the romance, science fiction, poetry and inspiration genres. A collection of the authors’ works can be found in their respective rooms, and titles by various authors can be found in the genre rooms.

After deciding on themes, Greenwood chose a color palette for each room. For example, she chose red for Zora Neal Hurston, black and blue for Walter Mosely and cream and black for the poetry suite.

To find accents and accessories for the rooms, Greenwood relied on her sisters-in-law and their interior decorating firm Kuumba Home Staging and Design. “One of the things they do is work with realtors who are selling houses. They go into an empty house and place small accent pieces throughout, giving it a ‘lived in’ feeling. When prospective buyers tour the house, they can actually see themselves living there. It’s so much better than having clients walk into a cold house with bare walls.”

For Greenwood, however, the most important thing about her sisters-in-law was that they have mastered the art of decorating on a tight budget. Having high-end tastes is not a crime, but paying high-end prices is criminal.

“I’m thrifty,” Greenwood admits. “I go to Pottery Barn and Linens ‘n Things. My sisters-in-law go to Target, Kirkland’s, as well as other stores. We all find great stuff at unbelievable prices.”

Sensitivity to gender was an important consideration when decorating the guest rooms. “To me all of the rooms are neutral,” Greenwood says, but she admits that “women tend to gravitate toward Zora Neal Hurston’s room.” The red in Zora’s room sets an exciting mood and reflects Zora’s dynamic personality.

The space named in honor of Langston Hughes has a haberdashery theme, and men seem to like it best. “He was a dapper gentleman and very handsome,” Greenwood says. Painted chocolate brown, the room is accented with suitcases, men’s furnishings, and antique furniture. Entering this room is like stepping back into the days of old, when bowties, cufflinks and fedoras ruled.

Greenwood stresses that no room is overtly feminine or masculine. She jokingly adds “there is no guest room for women with rose petals strewn over the floor and there is no room for men with a toolbox beside the bed!”

It was important to Greenwood that the rooms have no clutter. “There shouldn’t be too many knickknacks,” Greenwood says, “because guests need a place for briefcases, makeup, and toiletries.” Finally Greenwood advises innkeepers not to put their family photos and other personal effects in guest rooms. “It makes people feel as if they are intruding.”

Walter Mosely is best known for his mysteries. His room is blue on black, a choice that raised eyebrows when Greenwood suggested it. “People were skeptical at first, but when they see the room, they get it,” Greenwood says. The finished product confirms that Greenwood’s instincts were right on target. A feeling of film noir and mystery exudes from the dark blue walls, black desk and chairs, and the 1950s typewriter. Easy Rawlins, arguably Mosley’s most popular character, would feel right at home in these surroundings.

[/col_two]
[col_two last=”true”]”For the science fiction genre, I decided to go with blue and green because those colors seem futuristic to me,” she explains. Silver and metal dominate, giving the space a high-tech, contemporary look. Science fiction presented the greatest design challenge, but Greenwood pulled it off. “Thank goodness for IKEA,” she says.

Regardless of the theme, Greenwood says that guests have to be comfortable, there must be an air of romance, and rooms have to feel luxurious. Each room should contain:

Serenity was the goal for the guest room dedicated to the inspiration genre. “When we think of inspirational or motivational books, we want to be elevated,” Greenwood says. Here, a skylight floods the room with natural light. Guests can soak their troubles away in the clawfoot tub. This is definitely the place for rebirth and growth. 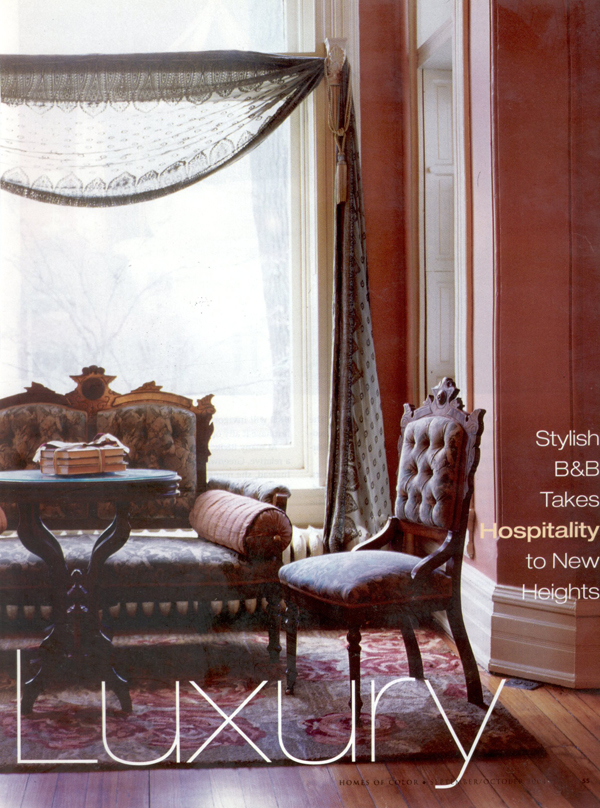 Of all her accomplishments, Greenwood is most proud of the fact that she and her husband developed a retail strip in the Bedford-Stuyvesant neighborhood in New York. Building by building, they purchased all the property on the block and committed themselves to bringing in the kind of businesses the neighborhood needed. Their tenants include an antiques store, a barbershop, a hair salon, and a bookstore.

Even Greenwood’s daughter, Glynn, has been bitten by the entrepreneurial bug. One day while walking by her parents’ property, she peered into the last vacant retail space. When Greenwood asked what she saw, Glynn said she could imagine people on the other side of the glass drinking tea and eating cake. She also envisioned the space with mirrors everywhere, but Glynn said that “when our people walk in, I want them to see their beauty.” Their vacant space is now occupied by Mirrors Coffeehouse, owned by 12-year old Glynn Pogue.

Glynn stops by the coffeehouse every morning before school and works there on weekends. She was three years old when her parents gave birth to their first B&B. Seeing her parents develop their business plans, interact with employees, and increase their holdings has had a positive effect. Glynn is confident, comfortable around other people, and already in possession of business acumen most people acquire after reaching the age of maturity.

Greenwood lives her life using her parents as role models. They stressed the value of education, and her mother instilled in her the importance of family and community.

From a business perspective, Greenwood’s grandfather, Benjamin Greenwood, inspired her. He owned a grocery store in Southeast Washington D.C. in the 1920s. When the white grocer across the street complained that he didn’t want his groceries delivered on the same truck as a black man’s groceries, the food wholesaler stopped delivering to Mr. Greenwood.

“My grandfather raised enough money to buy a truck so that he could pick up his own groceries,” Greenwood says proudly. “When he wasn’t using the truck twice a week to get his groceries, he used it to start his own delivery business. That company, Greenwood’s Transfer and Storage Company, became more successful than the grocery store.”

Like her grandfather, Greenwood is willing to work hard in order to make her business a success. With three B&Bs in three jurisdictions, some days it’s a challenge to get everything done. But Greenwood isn’t afraid to ask for help; her siblings are a great support system and will pitch in if needed.

Why would a person choose Akwaaba D.C. instead of a hotel? “It’s the pampering you get at Akwaaba. While my guests are out to dinner, I turn the beds down. There are hotels that have turndown service, but how many hotels will put on your favorite CD? How many will light candles and run a bubble bath?”

The search is over. Greenwood’s splendidly decorated corner of the world will provide the memorable experience you’ve been craving. She’ll leave a light on in the window for you.