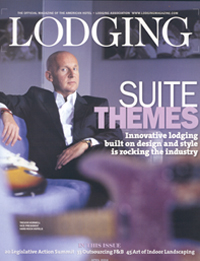 In Ghana, “Akwaaba” means “welcome”. For guests of Akwaaba D.C., the term conveys a special welcome: Monique Greenwood chose a literary theme for her Washington D.C., bed and breakfast and devoted the entire motif to celebrating African American authors.

The theme is tastefully evident upon entering the large brownstone, just blocks from Washington’s Embassy Row. The five floors are furnished in eclectic Victoriana, with giant portraits of African American literary legends adorning the walls. Each portrait features a quotation from a work of the author. None captures the spirit and mission of Greenwood’s third venture in lodging better than the quote from Terry McMillan, author of How Stella Got Her Groove Back: “I want the publishing industry to realize and I finally think they are starting to get a clue, that black people do read, white people do read our books; and we don’t all have the same voice, we don’t all come from all the same place.”

Hospitality came later in life for Greenwood. The D.C. native yearned to be a journalist since her youth, and somewhat against her mother’s wishes. Greenwood met the calling by working her way up the ranks of publishing to become editor-in-chief of Essence magazine. The benefits of the job were many, including the close contact with leading writers and the flexibility to pursue parallel passions: business and writing.

Along with her husband, Glenn Pogue, she converted an aging mansion into a bed and breakfast in Brooklyn, N.Y. A restaurant and coffee shop soon followed. She also began writing a book, part inspirational, part how-to and certainly part autobiographical-Having What Matters: The Black Woman’s Guide to Creating the Life You Really Want. As she was finishing the book at the B&B in Cape May, N.J., in 1997, she contacted a real estate agent to investigate buying a summer home there. The agent quickly steered her, successfully, to a B&B, which she named Akwaaba by the Sea and its guestrooms after prominent African Americans from the area.

In 2000, while visiting family, she again contacted a real estate agent, looking for a retirement spot. But the moment they stepped into the D.C. property, Greenwood knew it was for her. “I thought, ‘Oh my god, my spirit belongs here.’ I put it out of my head, but it was still in my heart,” Greenwood says. After some debate, they sold one of their rental properties in New York to make the down payment on the $950,000 building.

While Greenwood employs elements of themes at her other properties, the concept works especially well at Akwaaba D.C. “Theming gives lodging another avenue of marketing,” she says. Theming allows for another whole customer base coming to you, because of who you are, not just as a place to sleep. You are tapping into a passion. I’ve always believed you have to do what you love, and I love literature.”

The guestrooms in Akwaaba D.C. are named after literary genres and specific African American authors, such as the Romance Suite, the Poetry Suite, Science Fiction Suite (“which is the toughest to book”) and Greenwood’s favorite, the Inspirational Room. The four author rooms include two legendary and two contemporary. “In naming the women (authors), it was Zora Hurston, hands down. With the males, I easily thought of Langston Hughes, James Baldwin, and Richard Wright. But I had to go with Langston Hughes-because I like his elegance.” In determining the contemporary authors, Greenwood chose Walter Mosely and Toni Morrison.

She also created a writer’s retreat in the English-style basement. It’s a fully furnished apartment Greenwood makes available to up-and-coming writers. “We award authors with two weeks at no expense to them,” she says. “It really is the oasis I wish I had. If they can escape and push back the rest of the world long enough to focus on their craft, it’s a great thing.” Greenwood says she’s looking for a corporate sponsor to help underwrite the retreats.

Opening Akwaaba presented Greenwood with typical problems, mostly construction related. Staffing, however, tends to be her toughest problem. “They have to be very hands-on, from soup to nuts,” Greenwood says. “It’s very hard to find a person who doesn’t think pieces of the job are beneath them. They are at the mercy of the guests-there are no regular hours.”

Her advice to those who would theme their hotels is to institute subtlety. “You can’t hit the guest over the head,” she says. “You have to have balance, so you don’t alienate the non-readers. Mainly you just can’t overwhelm them with the theme.”

Overwhelming, though, may describe Akwaaba D.C.’s reception in the Washington area. More than 1500 of D.C.’s glitterati and literati crowded Akwaaba D.C’s opening party last fall. Television seems to be the most frequent form of media exposure she’s had so far. Business has been brisk, and she’s had little time to look back. And that’s fitting for the self-help author whose key theme is always looking forward.