Akwaaba Philadelphia: The bed-and-breakfast that speaks to black people opens in West Philadelphia 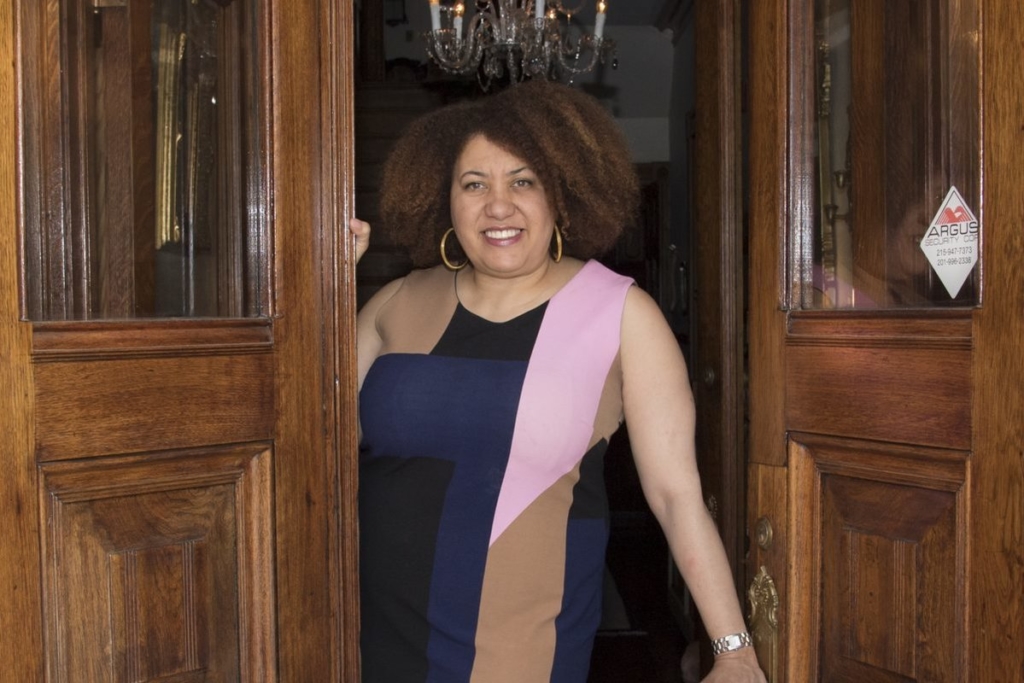 The sparkling chandeliers would definitely stay. But the vintage photographs that depicted only  turn-of-the-century white people, well they had to go. The old-school floral print china was stacked and ready to be boxed and replaced with geometric-patterned place settings.

“The thing about a bed-and-breakfast, it should be a reflection of the owner, her tastes, her sensibilities,” Greenwood, 59,  shared with me one recent morning as the early summer sun streamed into the dining room of this very grand Baring Street home. “But at the same time, it shouldn’t feel like my house. It should feel like your house. It shouldn’t be museumlike, or pretentious and stuffy. Everything is to be enjoyed.”

Over the last 23 years, Greenwood, and her husband, Glenn Pogue, have amassed quite the collection of  bed-and-breakfasts popular in tony travel circles that speak directly to the sensibilities of African Americans without excluding folks of other cultures.

This doesn’t mean it’s a  bed-and-breakfast that caters to just black people. But it does mean black people feel welcome, and that’s important when a place is billed as a home away from home. Too often, African Americans don’t feel like we belong, and when we do show up, people think we are the help

This never happens at Akwaaba. For every Time or Fortune magazine on an Akwaaba coffee table, there is an Ebony or Essence. One isn’t hard-pressed to find books by black authors in the library, or jazz or R&B mixed into easy-listening selections. And there is a good chance the executive chef might serve grits in addition to oatmeal at breakfast.

Greenwood turned her home in Bedford-Stuyvesant, Brooklyn, into the first Akwaaba — it means “welcome” in Twi, a dialect spoken in Ghana — in 1995. Since then, Greenwood, a former editor of Essence magazine, has opened Akwaabas in Washington  and two in Cape May.

In November, Oprah Winfrey’s OWN network launched the reality television series Checked Inn, based on the ins and outs of Greenwood’s palatial property in Bethany, Pa., in the Poconos.

The Bethany Akwaaba,  named the Mansion at Noble Lane, was once  home of the founders of the F.W. Woolworth Co. It sits on 22 acres, and amenities include a swimming pool and gym, as well as tennis and volleyball courts. It’s attracted celebrities like Kerry Washington, Taraji P. Henson, Yasiin Bey (the rapper formerly known as Mos Def), and Anthony Anderson.

“My grandmother, who lived to be 102, told me that there was a time when she couldn’t sit at the counter at Woolworth, and that, ‘Now my baby girl is all up in their mansion,’ and we both did two snaps up,” Greenwood told me.

When it officially opens in September, Akwaaba Philadelphia will be Greenwood’s sixth bed-and-breakfast. The $1.2 million, 5,000-square-foot, three-story West Philly property — complete with cupola overlooking the city — was built in 1879. There are six suites and the property sleeps up to 20. Most of the suites have a living room area and kitchenette. A library will be on the first floor, and Greenwood plans to turn the area off the kitchen into a parlor.

It won’t have all the bells and whistles of Noble Lane, and,  like on the OWN show, Greenwood promises a daily happy hour. I wanted to know if the chef at Akwaaba Philadelphia would be as cute as Chef Shawn. Greenwood isn’t making any promises.

She did promise me  Akwaaba Philadelphia will have a theme rooted in our city’s rich African American history that  she will show off  Wednesday for a first look on the  Fourth of July. It’s a longstanding Akwaaba tradition to host an event at the newest Akwaaba on Independence Day.

“Independence Day is the day I celebrate my own independence,” Greenwood said, “And especially in Philadelphia. This is the beginning of it all.”

The local hospitality industry couldn’t be happier. Not since Agnes Ogletree’s Rittenhouse Bed-and-Breakfast that opened in 1999 and closed in the early aughts has there been an African American-owned bed-and-breakfast in the city.

P.J. Thomas, founding editor of Pathfinders, the travel magazine for people of color, finds that ironic. Not only was Philadelphia  home to several black-owned hotels in 1940s and 1950s, she said, black-owned bed-and-breakfasts, once called boardinghouses, were among the only establishments where black travelers knew they would be welcome and where they could stay safely.

These days, bed-and-breakfasts serve as soft places to land in a travel landscape dominated by impersonal chain hotels and Airbnbs, where convenience almost always trumps culture.

“The experience is just so different,” Thomas said about her experience staying at black-owned bed-and-breakfasts. “The food is tailored to an African American palate.  Even sitting around in the evening with wine on the wind-down hour. It’s an inclusive experience. It’s nice to see myself, even if it’s something as simple as seeing a black family in a picture in a beach scene.”

Although Philadelphia is among the top cities that attract Akwaaba’s repeat travelers, Greenwood didn’t have any intention of adding a Philadelphia locale to her real estate portfolio until November.

That was when natural hair salon owners Leroi and Cinzia Simmons of Germantown hosted a viewing party for Greenwood at Rose Petals to celebrate the premiere of Checked Inn.

“It just so happened the owner of Rose Petals was also a real estate agent,” Greenwood said. “I mentioned in passing that Philadelphia would be a good location, and by the end of the night she had a printout of four or five listings.”

Greenwood visited a few before going back to Brooklyn. At home, she did more research and decided West Philly would be a good fit because of its proximity to two major universities, hospitals, and because it’s  a short train ride from Center City shopping and sightseeing. She discovered Spruce Hill Manor. As it turned out, the owner was willing to sell.

On Tuesday, Greenwood was back in Philly, and the walls on the first floor of the Baring Street mansion  were primed and ready for paint. Greenwood was on her way to rent a U-Haul to pick up furniture she’d picked out. She’s been steady on the phone with contractors.

“Now I find myself in this whirlwind,”  Greenwood said. “But I’m planning to have this first floor ready. I’m praying and I’m planning.”

Akwaaba Philadelphia will be at 3709 Baring St. For more information, log on to the website at www.akwaaba.com