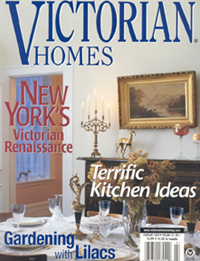 Brooklyn’s historic Bedford-Stuyvesant neighborhood has been lived in and lovingly cared for by the descendants of freed slaves for 150 years.
By Amy Gale Photographs by Gary Isaacs

Across the street from the Atwells is a 1860s Italianate that opened in 1995 as the Akwaaba Inn. Monique Greenwood and her husband Glenn Pogue bought the place as an abandoned ruin and transformed it into a bed-and-breakfast. The interiors combine Victorian furnishings, African-American artifacts and African craftsmanship. Carved Nigerian doors decorate the ballroom and Kenyan ceramics line the plate rail in the dining room.

For longtime residents, it’s gratifying to see a good neighborhood get better. Many belong to the Brownstoners of Bedford-Stuyvesant, a civic organization that was founded in 1978 to staunch local decline. “We believe in preservation in the largest and best sense,” says founder and current president Brenda Fryson. An annual house tour raises funds for college scholarships, literacy programs and other services that keep the community strong. Ask a Brownstoner about stoop repairs and he’ll probably tell you about improvements in the schools. “You’ve got to look at the whole picture, not only the housing stock,” Fryson emphasizes.

Still, housing stock is lovely. Bedford-Stuyvesant first developed as a suburb of Manhattan in the 1840s thanks to the establishment of omnibus lines, an early form of public transportation. By 1880, 14,000 people lived there with the most prosperous inhabiting the newly built row houses. Architecturally, little has changed since then, and Bed-Stuy is today one of the most intact Victorian districts in New York City.